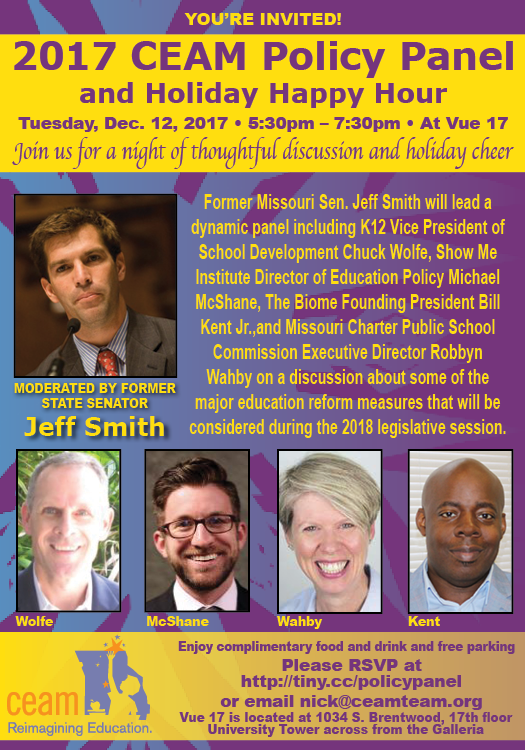 More about our panel members:

Jeff Smith is executive vice president of Concordance Academy, a new non-profit focused on helping formerly incarcerated people successfully transition into the community. Previously, Jeff was a professor of urban policy at The New School's Milano Graduate School, where he researched and taught urban political economy, policy analysis, campaign management, legislative strategy, and incarceration.
From 2006-2009, Jeff represented St. Louis City in the Missouri Senate, and narrowly lost a 2004 race for U.S. Congress; his youth-powered grassroots campaign was chronicled in the documentary Can Mr. Smith Get to Washington Anymore?, which was short-listed for an Academy Award. Before that, he co-founded the Confluence Academies, a group of city charter schools. Jeff has written three books: Trading Places, on U.S. partisan realignment; Mr. Smith Goes to Prison, a best-selling prison memoir and argument for reform; and Ferguson in Black and White,an historical analysis of the town's unrest. He graduated Phi Beta Kappa from UNC-Chapel Hill with degrees in African-American Studies and Political Science, and earned an M.A. and Ph.D. in Political Science from Washington University.

Bill Kent Jr., The Biome School Founding President and CEO, has led Youth Learning Center (YLC) since its inception. Recognizing that so many of the boys he grew up with did not have the family support he enjoyed and that many of those boys ended up in prison, Mr. Kent was moved to leave his business career and dedicate his professional life to improving academic and life outcomes of youth from under-resourced backgrounds. He applied his background in business management to directing the original YLC building project in 2010 and the 2015 renovation. He has also overseen the development of programming from an all-volunteer organization to the current organization providing STEAM education through outreach programs and eventually the founding of The Biome School in 2015.
The Biome School is a new kind of K-8 school for the next generation – one that offers customized, project based and student-centered learning opportunities with an emphasis on growth mindset and STEAM (Science, Technology, Engineering, Art and Mathematics) education. The Biome charter school creates a balanced learning ecosystem in which teachers work together with students to cultivate a growth mindset as they discover their unique gifts, talents and interests.
Mr. Kent earned his Bachelor of Science from Lindenwood University and joined Youth Learning Center after serving as a manager and career insurance underwriter with Reliable Insurance Company for 13 years.

Robbyn Wahby serves as the founding Executive Director of the Missouri Charter Public School Commission.
Prior to her appointment toMCPSC, Robbyn served as Deputy Chief of Staff to St. Louis City Mayor Francis Slay where she provided direction and advice on education and children’s policy. She began in 2001 and led the city’s K-12 school reform effort. In 2006, Wahby developed and directed the Mayor’s strategy to expand quality public charter schools within the City of St. Louis. Over the next nine years, 28 new public charter schools opened and several poor performing schools were closed. She also worked with the City’s private and parochial schools to assure all St. Louis families had an array of quality options.
Prior to joining the Mayor’s Office, Robbyn held a variety of leadership positions in public, private and non-profit organizations and served as an elected member of the St. Louis Board of Education.
Robbyn serves as a member of the Board of Directors for the National Association of Charter School Authorizers and was recently honored as one of CEAM’s Champions of Education Reform.

Dr. Michael Q. McShane is the director of national research at EdChoice, prior to that he served as Director of Education Policy at the Show-Me Institute and an adjunct fellow in education policy studies at the American Enterprise Institute (AEI) .
He is nationally recognized for his work in evaluating school choice programs and examining state and federal level policies.
Mike is the editor of New and Better Schools, the author of Education and Opportunity and coeditor of Educational Entrepreneurship Today, Teacher Quality 2.0 and Common Core Meets Education Reform. His analyses and commentary have been published widely in the media, including in the Huffington Post, National Affairs, USA Today and The Washington Post. He has also been featured in education-specific outlets such as Teachers College Commentary, Education Week, Phi Delta Kappan and Education Next. In addition to authoring numerous white papers, McShane has had academic work published in Education Finance and Policy and the Journal of School Choice. A former high school teacher, he earned a Ph.D. in education policy from the University of Arkansas, an M.Ed. from the University of Notre Dame and a B.A. in English from St. Louis University.

Chuck Wolfe is Vice President of School Development for K12 Inc., the nation’s leading provider of digital learning solutions for grades Pre K-12.  In this role, he works with state agencies, school districts and charter schools to help develop innovative online programs to serve students in both full-time virtual and blended environments.  His primary emphasis in the past several years has been on the development of career focused programs that integrate collaborative partnerships.  He previously served as Executive Director for Insight School of Colorado and was part of the leadership team that launched the Insight School of Kansas.
Chuck started his career as a math and social studies teacher at Camdenton R-III School District in central Missouri.  He then went to law school and worked as a corporate transactional attorney for major law firms and national corporations before starting a second career in education.  Prior to joining K12, he worked with National American University as the Director of Legal Studies and Campus Director in the Kansas City region.  In this role he helped develop and manage the paralegal program and served as the chief administrator for two campuses.
Chuck earned a B.S.Ed. from the University of Missouri-Columbia and a J.D. from the University of Missouri-Kansas City School of Law.